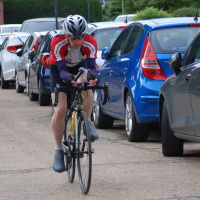 RicF ✭✭✭
September 24 in Training
In the light of how many runners are cyclists as well, I thought maybe it's time there was a thread where cycling was the prime aspect.

So no running to mention, yet.

Ok, I might not be running, but fitness and power are certainly showing itself.

The other day I had a go at a Strava bike segment comprising of the Amersham Road out of Chesham. A few minutes later I'd topped my age group in every sector or version from one end to the other.

Have to admit, the addition of a Power Meter to the set up has been very useful in these ventures. I set off, look down at the numbers and weigh up the likelihood I can keep going at the rate. One learns a few things this way.

In my case it's that the only real way to get faster is to get lighter.
0 · Share on FacebookShare on Twitter