Wednesday 21st July - can you hear me 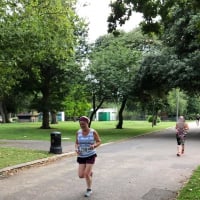 Wabo ✭✭✭
July 21 edited July 21 in Training
Lyrics
Can you hear me? Can you hear me?
Through the dark night, far away
Oh sorry for your loss but understand what you mean about release
Mate who got me to enter race blew me out during the day. I was at work, no running clothes and the race was closer to my work. So I left work knowing id have to come back home then head out again. Drive home was bad due to a crash (I went long back roads to avoid). So in fact I didn't race or run!! I was a bit annoyed with my mate as I would have run first thing when it's cooler or taken running gear in so it was a quicker drive. Never mind
What forest run soon
Why cooler
Last hard Monday
Last rest yesterday
Have a good day all
possunt quia posse videntur - we can because we know we can
0 · Share on FacebookShare on Twitter