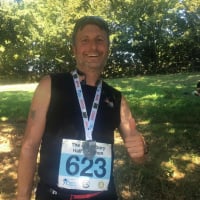 LintonTravelTavern ✭✭✭
February 12 in Health + Injury
Hi all,  had a bit of a mishap end of last year and although the NHS have been great I'm not too sure what I should or shouldn't be doing now.  My diagnosis was a bit late and I ran when I thought it was just a sprain, which wasn't clever, I know.

Just wondered if anyone has been in a similar situation.  Time line was:

21st November, Running up a muddy, undulating hill, rolled my ankle.  Hurt like hell, limped home.  Swollen, X ray carried out next day, not broken.  Diagnosed as nasty sprain.  Three days off work.  Then back, but badly hobbling for 2 weeks.

A sore month off running, too keen to get back.  Then 3,4,5,9,10 milers around Christmas time.  Ankle swelled terribly.  Another X-ray 31st December, got results 20th Jan, fracture showed, so had taken a while, as stress-type injuries do, to be visible.

I'd been at work on my feet 40-50 hours a week at work all through this time.  MRI shortly after confirming it.  Undisplaced fracture right of distal Tibia.  It's been recorded as a stress fracture, but the consultant agreed it wasn't a true one as was the result of a ankle eversion rather than something that came on slowly.

So the initial injury was now 12 weeks ago, but I without doubt made it much worse when I commenced running at Christmas, 7 weeks ago.  That's when I realised I'd most definitely hurt myself, and what I consider the start.

Signed off work for a month (fortunately my only long absence in 17 years), and have been sat indoors.

Just wondered if I can use my static bike?  Am I allowed to walk?  Online it says avoid walking?  I haven't really got access to a pool near me.

I'm SO worried about overdoing it as I didn't do myself any favours at all with running on it.  I have crutches, but it seems at bit late now.

Anyone been in a similar situation?  How much weight did you try and keep off it? and what did you do?