OO.. a few years ago I suspected I had a shin SF as it was very sore.  However when I consulted the Doc he proceeded to hit the affected area with a rubber mallet; as I hadn't hit the ceiling he pronounced it as mere shin splints.

.  Hope you can manage to get back to it from here onwards.

Happy Anniversary Joe (I assume it's a marriage celebration!)

TR.. good to get news of the start arrangements, you shouldn't be hanging round for very long at all.

10.6m today, utterly miserable grey/wet weather so considered myself lucky to get 4 dryish miles before the sweeping heavy drizzle arrived.  Grateful for the rain jacket, first outing in ages.

Afternoon all,
A quick Garmin update (I know how thrilling you must all be finding this) -
After my 6 mile run on Wednesday (which I’ve now re-estimated as actually being 5.5) I was so annoyed that I hadn’t been able to lock on to GPS that as soon as I got back home I asked Steve to put his Garmin on and walk around the estate with me to see if his Garmin could find the satellites, which it did, although mine still didn’t until I was about to re-enter our house.
So yesterday, when we were at the coast for my Chiropractor session, I tried it out again. Steve went for a run/walk (he started Couch to 5k again yesterday) and had no problem locating the satellites as he ran along the promenade. I however walked from the Chiropractor’s to the prom, a little over a mile, without finding any satellites. On the way I walked through an open park, then along the sea front, so I was sure there couldn’t be any blocking of the signal from tall buildings. Also the weather conditions were quite different from Wednesday, being sunny instead of overcast and drizzly. (I know the weather probably has no effect on the GPS system but I thought it was just possible it might have made a difference, I was grasping at straws by this stage).
Then we drove a few miles up the coast and walked for 2 miles through sand dunes - still no satellites for me, but Steve got them straight away. By now I’d decided to return the watch but decided to try once more, so this morning I went to my local park for my hill repeats session, I did eventually get satelitte reception but only after I’d run a mile to the park and done two hill repeats.
So on return I contacted Amazon and they are sending a replacement watch to me which will arrive tomorrow, the defective one will be picked up by Hermes free of charge on Monday.

Hazel: couldn't go to the suite this morning as I had a structural engineer round. Have a few building issues, possibly subsidence. Needs further examination.

Hope you chill this weekend, Chick!

And trust that your legs don't regret today, LMH!

What: fitness suite plus run which included 2k warm up, 2 x 4 mins hard with 90 secs recovery, warm down.

Why: part 2 of step 6 of speed work. Very windy. 10 steps to go!  Or more. Fitness suite very quiet: booking system and only six booked, with 30 being the max.

Re: The Thrifty Thread

Pick all the snails from your local canal and sell them to posh restaurants, 100% return..

It's my handsome good looks and ageless persona SG 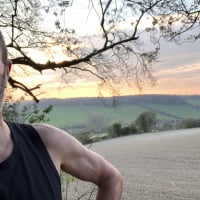 Fridge magnets were definitely in the goody bags from 2010 - 2012.  Conceivably there might have been a stall at the expo in 2009 that gave some away (they must have got the idea in 2010 from somewhere!) but they weren't a universal giveaway.

I got an email from Boston marathon this morning with a link to marathonfoto that had all the photos from all the races I've done with them since 2008.  I never bought any but it was nice to look back.  I'd forgotten what a lonely race I had at FLM 2011 - 40 pics and I'm the only runner in about 90% of them.  It's not like I was running 2:20 or whatever where that's common, it was just one of those things.  That was the only year I made it properly onto the telly, turning onto The Mall.  Happy days!

Jooligan said:
Interesting PMJ but notice your cadence is around 180 so 20% higher than mine & from what you've said your speed was significantly faster than mine back in your racing days.

So you are saying I'm now a slow coffin dodger

A busy week here. Managed to get out with the dogs this morning and ran a 4.14km with them chasing my husband! 😂

You had me worried i had miscounted for a while as im a week before you.